Why we love doing EC

This article was first published in The Mother magazine, issue no. 9; Spring 2004.   www.themothermagazine.co.uk

When I first mentioned to my husband, Carson , the idea of doing Elimination Communication (EC), he gave me his look that says, ?Here we go again! Another one of your ?out-there' ideas that is going to change our lives forever.? I'll admit, when I first heard of EC I thought it was nuts, and that it would mean pee and poop everywhere. I quickly dismissed it as foolishness. But the idea continued to grow on me. By the time I was pregnant with our second child, Simon, our first child had finished his transition out of diapers. Living with a toddler without diapers was so much easier! I started to think that EC could work for us.

As I researched EC, what drew me most was hearing about the loving, caring, and joy that the parents who practiced EC were enjoying with their babies. People also talked about the convenience of fewer diapers to buy or wash, better hygiene for baby, and environmental advantages of using fewer diapers. None of the practical arguments attracted me; I wanted to see if the level of loving and intimacy people said was available through practicing EC could be ours.

When Simon was born, we immediately began observing his bodily and vocal expressions that occurred prior to his peeing and pooping. We then watched for these signals in order to anticipate his need to eliminate. We also began learning the timing patterns of his elimination. By the time he was one week old we were ?catching? more than half his poops, and after two weeks, we were ?catching? the majority of his pees. It certainly was more convenient, more hygienic, and more fun than diapers, but the real joy was just beginning to unfold.

Day by day I could feel our connection growing. By the time Simon was three and a half months old he had proven to me that EC is more than just "parent training.?  He started doing his own "pee sound" which was an imitation of our "sss" cue.  He used it to signal us, used it to cue himself to pee when on the potty or when held at the sink, and he also used it after he had finished to say, "I peed."  He varied in the amount of warning this signal gave us and used it about 80% of the time.  My personal favorite was when he would pop off while nursing to give me a little smile and the signal sound to let me know he needed to take a pee break.

As the months passed Simon's signals have changed many times, as have his preferences about where he likes to make his pees and poops. His interest in signaling and the clarity of those signals ebbs and flows. One fun part of practicing EC is catching pees and poops, but EC is about much more. It is about accepting him where he is developmentally, working with him to find alternatives that meet his needs and those of our family as a whole, respecting that even as a tiny baby he has his own way of doing things.

Endeavoring to become a truly compassionate, gentle parent has opened space inside of me that allows me to live with much more peace and ease. Elimination Communication is a minute-to-minute living meditation, supporting me in staying present and living in each joyous moment with my family. I love practicing Elimination Communication because it enhances every aspect of our family life, bringing us all closer, and promoting respect and understanding amongst us all.

Rachel was co-founder of www.DiaperFreeBaby.org 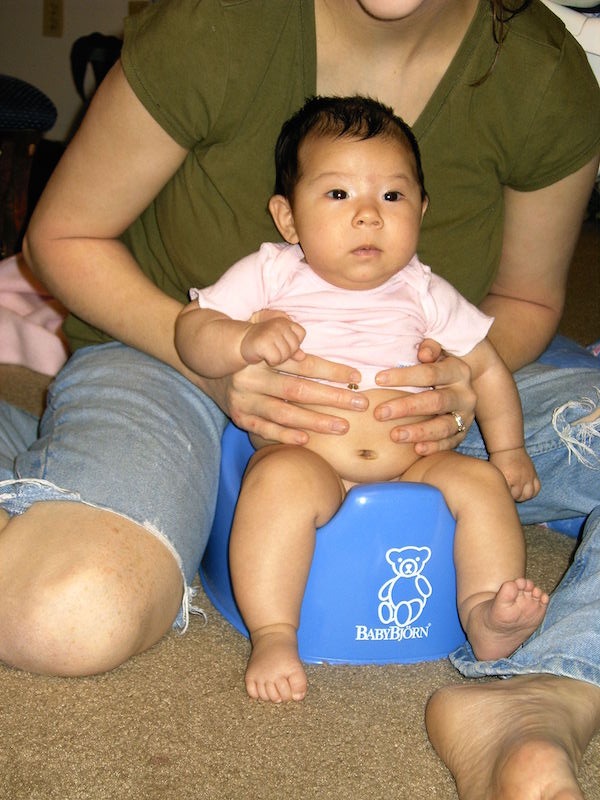 You're learned about what EC is. Now learn how.
Get hands-on, visual EC instruction from our friends at Go Diaper Free.
Any purchase you make over there benefits our organization. Thank you!