DiaperFreeBaby and Elimination Communication in the News

Over the past few months we have seen everything from slick national and international pieces to good old-fashioned grassroots outreach. Neither type is any more important than the other; each has its unique place spreading the word about EC.

We've seen more magazine pieces, including American Baby and Parents. These magazines are available in pediatric offices across the country and will continue to inform parents for months to come. Twins Magazine opened up the possibility of practicing EC with multiples. An article in WNC Parents from North Carolina was quite positive.

The Salt Lake Tribune ran an article in their Close-up section which appeared in several communities throughout the Salt Lake area. The Asheville Citizen-Times and Poughkeepsie Journal ran the same or similar articles as the WNC Parents article.The Daily Republic in Fairfield, CA presented a well done piece.

We've continued to see international and multi-cultural interest including both Telemundo and Univision television. In Canada there was a long article by the Montreal Gazette and a positive piece by CityTV in Edmonton.

We've seen, or rather heard, more radio interviews including an interview with me on Y98 in Missouri and a long interview with DiaperFreeBaby Co-founder and Executive Director Melinda Rothstein on NaturalMomsTalkRadio.

Two of my favorite outreach efforts, though, are each on opposite ends of the spectrum, MSNBC News Live and Clearwater's Great Hudson River Revival Festival.

Melinda Rothstein then appeared live in a split screen satellite interview with anti-AP Slate magazine editor Emily Bazelon. Melinda was able to correct the misconceptions put forth by Emily by talking about ways EC can be done by other caregivers and part time. Contessa Brewer was quite positive, having been convinced by her time spent with Contact Beth Schwartz on the benefits of EC.

Another of my favorite outreach efforts didn't take place in a news studio or travel across country at the speed of light. It took place amongst the grass, earth and sun along the Hudson River in NY. DiaperFreeBaby set up a booth in the Activist Area of Clearwater's Great Hudson River Revival. This area, which "gives groups the opportunity to explain to the public how their efforts heal and transform the world into a better place," typifies grassroots outreach. There is something magical about the festival setting. 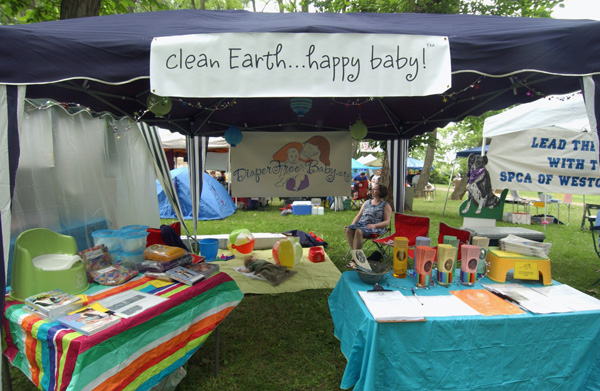 I talked with people from a variety of backgrounds on many facets of EC. I invited folks into the booth to let their babies play, nurse or just sit and chat. I spoke with parents, grandparents, healthcare professionals, infant care providers, pre-school teachers, babysitters, special needs specialists, even a colon therapist. Other exhbitors also showed great interest and excitement about EC and DiaperFreeBaby.

The highlight was when legendary singer and songwriter Pete Seeger stopped by the booth. He came looking for our booth to tell a story about his mother washing his cloth diapers out in a big metal washbasin over a fire as his family travelled across country in a homemade wagon. The year was 1920 and Pete was 1 1/2. 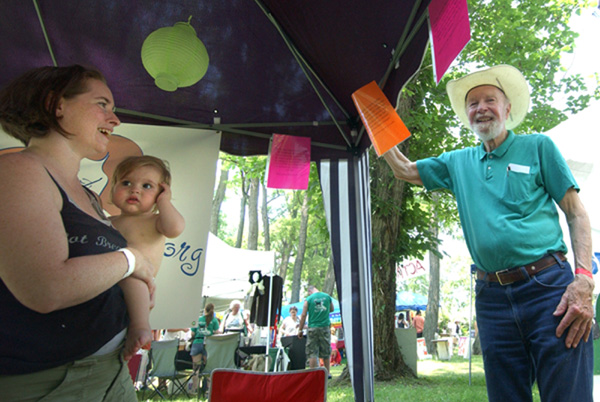 It is always a pleasure for me to be able to share these stories with you and for all of us to share EC with the world in our own ways no matter how great or how (seemingly) small.

Please check out the updated In The News page for all the new stories, including a new section for EC "Cameos."